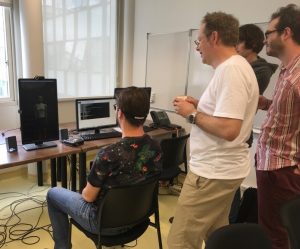 Early june there were an Aria-Valuspa meeting held in Paris. It started with a 2 working days for the developers. They actively worked on finalizing a new version of the Aria-Valuspa demo. They resolve bugs, speed up the connection between modules, and enhance several of Aria modules such as agent’s behaviors, ASR. The Dialog Manager has been enriched allowing the agent to provide a large set of answers.
A particularity of this Aria-Valuspa meeting was the encounter with industrials. 3 French companies were present, EDF, JobMaker, EasyRecruit. The meeting started with a presentation of the Aria-Valuspa project, from its motivation to its system. It follows by a discussion between the stakeholders and the Aria-Valuspa partners on specific use cases they were interested in.
The last day of this Paris meeting was devoted to project management where we discussed the final development of each module as well as the evaluation for the Aria System.