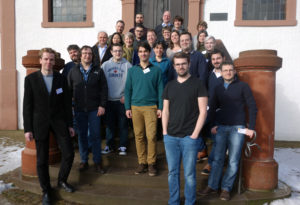 At the joint seminar at the Leibniz – Centre of Computer Sciences, Dagstuhl Castle, Wadern, the ARIA VALUSPA project met up with the EU project KRISTINA to exchange their insights, progress, promising approaches, and create new (research) friendships.
The Leibniz – Centre of Computer Sciences is located in the south-west of Germany and offers a very relaxed and secluded location where computer scientists can come together to discuss and work on their research.

The KRISTINA project aims to develop technologies for a human-like socially competent and communicative agent. It runs on mobile communication devices and serves for migrants with language and cultural barriers in the host country. The agent they develop will be a trusted information provision party and mediator in questions related to basic care and healthcare for migrants.

The two projects clearly owns many similarities, which allows both teams to learn from each other. However, during discussions they identified some interesting differences. The ARIA project is working on a natural interaction system, that focusses more on “social banter” such as real-time interruptions. These interruptions can be done by the user himself (the user starts talking when the agent is speaking) or by the agent (the agent starts talking when the user is speaking). By making the agent respond in an appropriate manner to interruptions, it is hoped for creating an atmosphere of a more natural “small talk”. The KRISTINA project is working on a task based system that relies more on information retrieval and transfer. A migrant can use their system to ask questions about their new home country, for example, how healthcare is organised.

During the joint seminar, both teams presented demonstrations of their systems. A notable demonstration of the ARIA project was done by Angelo Cafaro. He presented the handling by the virtual agent of user interruptions, which was realised on the behaviour generation level. For the KRISTINA project, Dominik Schiller presented the demonstration of how their agent could emphatically react to a depressed user. The ARIA VALUSPA team was very interested to understand how the KRISTINA system worked. Yet, the most impressive demo was held by Gerard (KRISTINA) and Angelo (ARIA VALUSPA), who managed to connect the Greta platform from the ARIA project to the agent web-interface from the KRISTINA project in about an hour. This emphasized the importance and effect of standards (i.e. FML and BML)!

Additionally, there was an interesting invited keynote by Patrick Gebhard from the DFKI lab, Saarbrücken. He detailed the work of the lab on the Virtual Scene Maker, which can be used for designing real time interactive systems. The demonstration of the system gave an insight on the impressive ease of the configuration possibilities in Virtual Scene Maker.